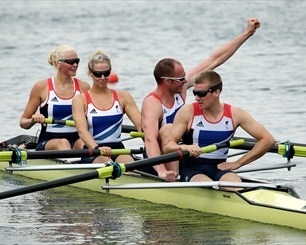 At the Beijing Paralympics in 2008 rowing became a Paralympic sport after having been included in the world rowing championships since 2002. Since then the numbers of crews involved has continued to grow so that at the London 2012 paralympics there were a total of 108 rowers from 23 countries competing in the 4 events offered, men’s and women’s arms only single scull, trunk and arms mixed double sculls and mixed coxed four.

I wanted to write this article about adaptive rowing as in this blog I have talked about the number of smartphone apps that are out there that would help with rowing, but in many ways these apps could be equally (if not more) useful in adaptive rowing due to some of the features they offer and the easy access to smartphones nowadays.

(Note: This post will focus on iOS apps since that is the phone I have access, I will try and look at Android at a later date)

For rowers with a visual impairment

Speedcoach Mobile
I’ve talked about the speed coach mobile app before and how it can be useful both for use while you’re rowing, and also for for overlaying data on top of your video, but for blind Paralympic rowers the fact that you can run the app on an iPad or iPad mini (for a much larger screen) and the fact that it also offers a VoiceOver feature which can provide audio commentary during your workout, means it would be worth considering. 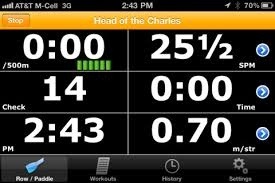 Now to activate and tailor the SpeedCoach app you stay in settings and scroll down till you find the SpeedCoach button and then select it, scroll down to “Miscellaneous” where the “VoiceOver settings” are selectable. Here you can now choose how often the voice over will talk, and in what frequency, for example stroke rate spoken every 5 seconds, distance calls every 250m etc but thats not all you can set for the app to report as there is a large amount of options for data for the app to call including rate, check, bounce, distance, elapsed time, heart rate, speed and average speed

Speaking rate watch
Rowing in Motion offer a speaking rate watch app which has two features, one being the ability to speak the rate as you tap the screen in time with the blades entering the water, but it is the second feature of the app which is of interest here as the app has a “remote” feature where it can sync with a separate iOS device running the Rowing in Motion and it can then the rates being recorded by that app 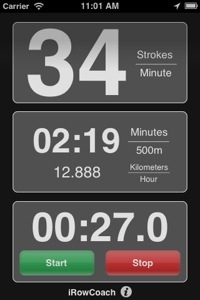 Rowing in Motion – Boat app
The rowing in motion Boat app has a built in sonification feature (sonification is the communication of information by the process of non speech audio), this video shows the feature in action

The video shows really well how sonification can show up little changes in technique, so it’s actually quite good for all rowers! But in rowers with a visual impairment it’s even more useful as it would give a good sense of how the oat was moving from stroke to stroke, the cox could attach the iPhone to the cox box to play the audio over the speakers during the outing.

Sonification is easy to switch on as well, once the app is loaded you just double tap on the screen to activate (ensure the mute switch on the side is off tho

Discussed on this page, erg buddy is an iOS app that works on your iPhone/iPod touch/iPad and your PM4 monitor on the concept 2 ergo, it allows you to use the brighter iPhone or brighter and larger iPad screens rather than the monochrome PM4 screen, and also supports VoiceOver making it a good choice for visually impaired athletes to judge their erg workout. 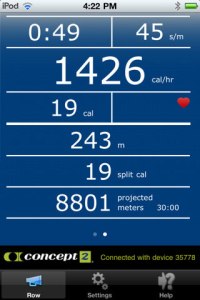 To make this work you need to download the app and also have the Wahoo ANT+ key so the iOS device can communicate with the PM4, then on the PM4 Main Menu, select More Options → Link → Link Concept2 Mobile Application → ErgBuddy 1. Finally, choose Remember Mobile. The selections are all made using the 5th button from the top of the PM4, so press this button four times, wait for about 15 seconds, and then press the 5th button once more. After taking these steps, the PM4 will try to connect with ErgBuddy each time the monitor is powered on.

For rowers with a mobility impairment
Rowing in motion – Boat app
Rowing in Motion has included a feature for athletes rowing with arms and shoulder rowing which they have discussed here, and you can read more about the rowing in motion boat app in my review here. To activate this feature again from the homepage go to “settings” then scroll down and select “rowing in motion” and there is a stroke detection toggle to turn on this feature

Those are all the apps I am aware of for on the market, however if you know of any more then leave a comment!

I am a rower who is a lot of a technology geek as well!
View all posts by stelph82 →
This entry was posted in Smartphone Software and tagged adaptive, Paralympics, rowing, Rowing in Motion, speedcoach. Bookmark the permalink.